Just like most of you, we are curious and willing to test just about anything that claims better performance. Most of our testing at Prestige Motorsports is in the form of product development. But occasionally we get the chance to do a quick comparison test.

Recently one of our customers sent in a set of Powerblast Plates he purchased from Thompson Performance. We have seen these seemingly simple plates advertised on social media for some time. The concept makes sense, so we were curious to test the results ourselves.

We mounted our video camera inside of the air exchanger duct which feeds our dyno room with conditioned air. This placed our point of view directly above the carburetor and straight into the accelerator pump discharge nozzles and main jet boosters.

The carburetor is a Quick Fuel Q-750. A couple of quick revs gave us a nice shot of the fuel discharge coming out of the primary accelerator pump nozzles. Then the transition from idle to wide-open-throttle (WOT) gives an additional view of the secondary pump shot. After completing the dyno pull from 3,500 to 6,500 RPM the Powerblast Plates were installed, and the same test was run again. 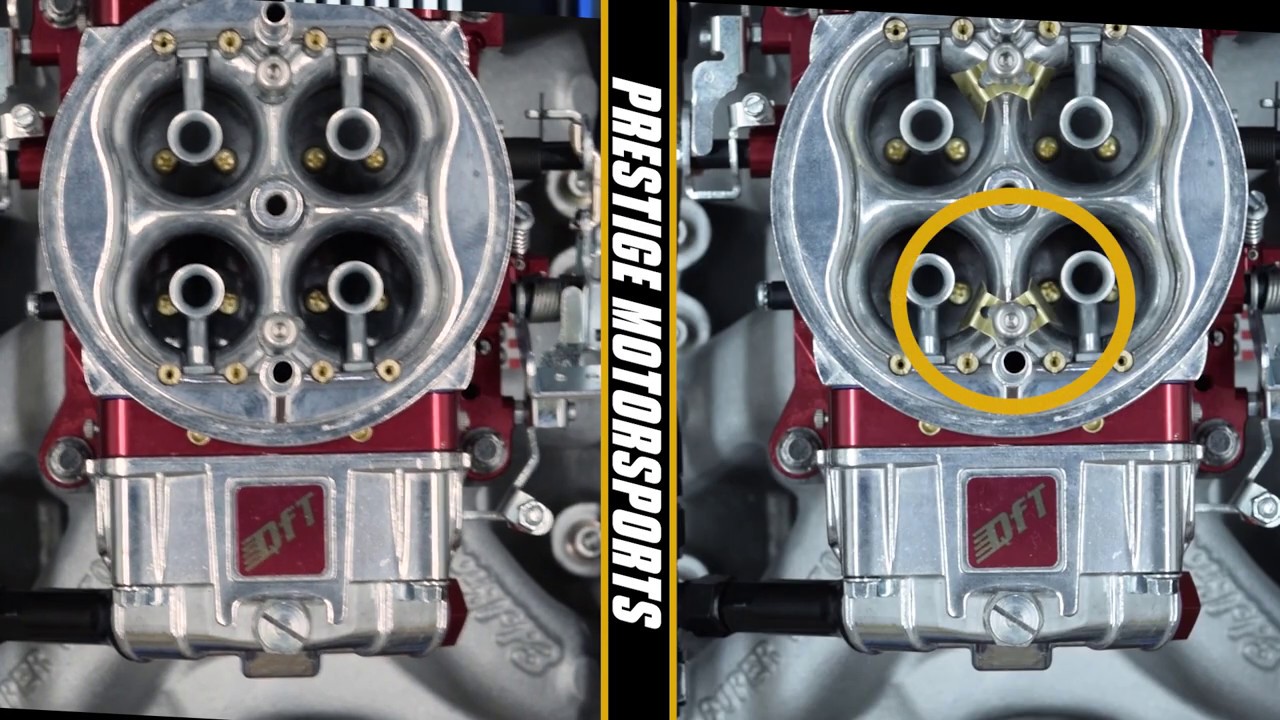 In the video, you will see the tests side-by-side. First the left view shows the initial quick rev test, followed by the same test with the Powerblast Plates installed in the right view. The transition to 3,500 RPM followed by the dyno pull is shown for each view simultaneously.

The answer is yes. Both the physical appearance of atomization of the pump shot and the feel of throttle response were significantly improved with the plates installed. Without the plates, our dyno operator sensed a slight hesitation in throttle response during the both quick rev test and the transition to WOT.

Most hesitations on acceleration are due to a lean mixture resulting from the sudden rush of additional air. More fuel is required from the accelerator pump to cure the hesitation. However, if the fuel is not atomized well, it can cause an overly rich condition immediately following the pump shot

With the Powerblast Plates installed, the same amount of fuel was discharged, but it was distributed more evenly due to the improved atomization as it was injected into the intake plenum. The result was crisp throttle response with no hesitation.

Thompson Performance also claims increases in peak horsepower and torque with the plates installed. While we did not see this in our testing, it does not mean that is not the case in chassis dyno or track testing. Engine dyno testing starts with the engine stabilized at a set RPM while at WOT. That means that any air fuel ratio recovery due to poorly atomized fuel coming from the accelerator pump shots have already occurred prior to power testing. Peak power gains, according to Thompson Performance, are due to less recovery time from raw fuel shots.